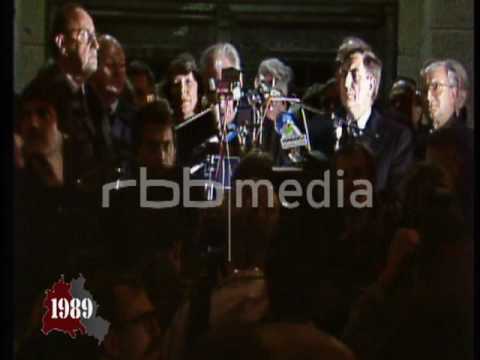 On 10 November 1989, the day after the border opens, Willy Brandt is in West Berlin. The former chancellor served as Mayor of Berlin between 1957 and 1966, which means he was in power during the early years of the Wall.

Brandt joins Chancellor Kohl in speaking at a rally outside Schöneberg town hall, where a crowd of Berliners have gathered. In his speech, he says: “From the war, and from the discord between the allied powers, grew the line that eventually divided Europe and Germany. Berlin reproduced this line in numerous ways. But now here we are, and I thank God that it has happened in my lifetime, watching as the two halves of Europe begin finding their way back to each other.” His famous words, “What belongs together can now grow together”, were not actually part of this speech.