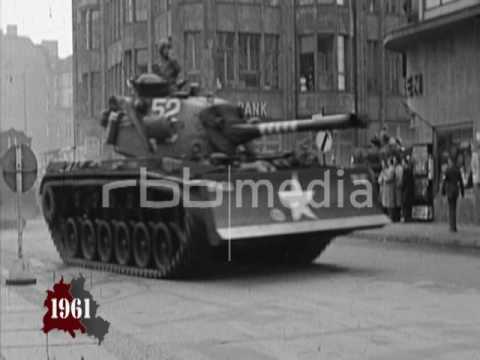 At the end of October 1961, the world holds its breath when American and Soviet tanks stand face-to-face at the US Checkpoint Charlie on Friedrichstrasse in Berlin. The GDR authorities are trying to restrict the allies’ freedom of movement.

Negotiations between US president John F. Kennedy and USSR First Secretary Khrushchev already last for several months. Khrushchev wants to make Berlin a free city and release it from the joint responsibility of the Second World War’s victorious powers, but Kennedy resists.

A few months after the the Berlin Wall is built, the situation escalates even further when the GDR tries to impose border controls on foreign diplomats and the military at Checkpoint Charlie.

US Special Emissary Lucius D. Clay responds by sending in tanks. Khrushchev then orders Soviet tanks to drive to the border, leading to a stand-off between the two superpowers that lasts 16 hours. ”