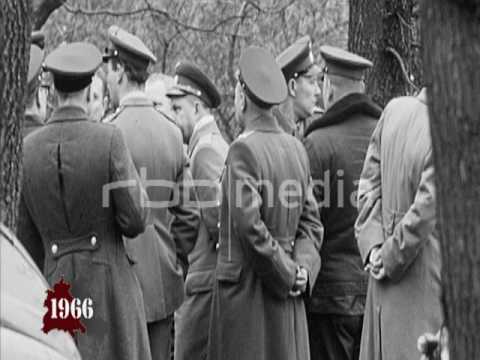 A Soviet plane crashes into Stößensee. Apart from the pilots, no one is hurt and a disaster is narrowly avoided on West Berlin’s densely populated Heerstrasse. A plaque on Stößensee bridge commemorates the fighter jet crash: “On 6 April 1966, Soviet pilots Captain Boris Vladimirovich Kapustin and Lieutenant Yuri Nikolayevich Yanov steered their faulty aircraft into Stößensee, losing their lives in the crash. Thanks to their selfless act, they avoided an unforeseeable disaster in the nearby residential area. This plaque honours the sacrifice made by the Soviet soldiers as a symbol of humanity in the midst of the Cold War.”

Speech of Willy Brandt during the visit of Lyndon B. Johnson 1961