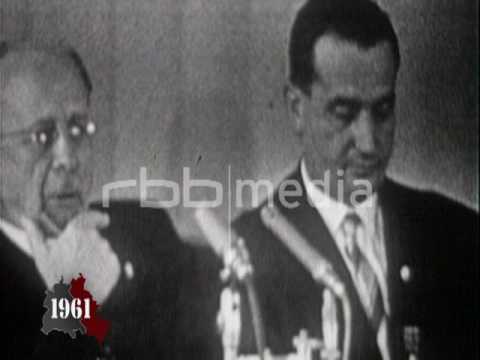 „Nobody has any intention of building a wall“ Walter Ulbricht – June 15, 1961

West Berlin is hosting the first German-American Festival. However, rumours are circulating that East Berlin is planning to close its borders. The Western world watches nervously to see what fate awaits the city. People have been leaving the GDR in their thousands and continue to flee. Cross-border commuters – Berliners who work in the West of the city, but live in the East – are being subjected to ever-tighter controls. At the same time, GDR head of state Walter Ulbricht faces journalists from all over the world asking about the status of West Berlin at an international press conference. Annemarie Doherr from the Frankfurter Rundschau asks Ulbricht if he believes that creating a free city will involve building a state border at the Brandenburg Gate. Ulbricht gives the following reply: “”I understand your question in this way: that there are people in West Germany who want us to mobilise the construction workers of the GDR capital to build a wall. Am I right? I am not aware of any such plans. Most of the capital’s construction workers are busy building flats and their manpower is being put to full use in these projects. Nobody has any intention of building a wall.” A few weeks later, events in Berlin reveal his statement to be a lie. On 13 August 1961 the GDR starts building a wall that will divide East and West for the next 28 years.

Germans at the Berlin Wall are waving at each other 1961