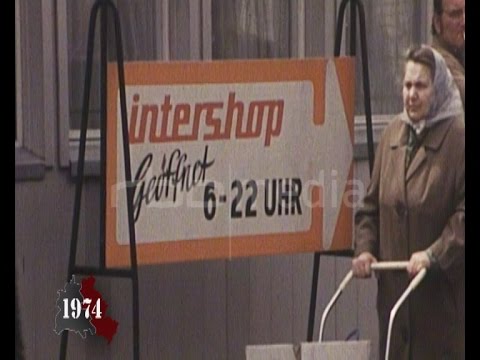 In 1974 GDR citizens are allowed to purchase Western goods in foreign-currency shops – known as Intershops – for the first time. The product lines in these stores featured a small selection of high-quality GDR merchandise and a large range of goods produced in the FRG or other countries in the non-Socialist economic area. Shoppers could pay in Deutsche marks (Western marks) or in other currencies, such as the US dollar or the Austrian shilling. Prices were marked in Deutsche marks and set by the GDR authorities. Special conversion tables were provided to convert West German marks into other currencies, but they had little relation to the actual rates. The Intershops, a source of tax-free goods, were very popular among West Berliners. Smuggling goods for personal use virtually became a national sport.