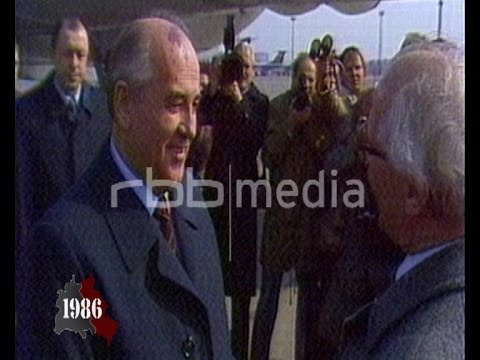 Mikhail Gorbachev, head of state of the Soviet Union, visits East Berlin in April 1986 for the 11th party conference of the Socialist Unity Party of Germany (SED). At this stage, the party’s hardliners still have the upper hand in the GDR. Gorbachev, who has only been in office for a year, uses the occasion to speak about glasnost and perestroika. Right at the end of his visit, he gives an interview at Schönefeld airport. He jokes that in the Soviet Union everyone says “DDR” (the German initials for GDR) stands for “dawai, dawai, rabotai,” which translates roughly as “go on, go on, work”.