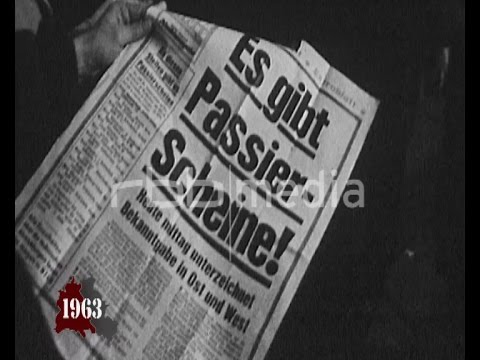 For the first time since 1961, small gaps start to appear in the Wall. The border pass agreement is signed on 17 December 1963, 28 months after the Wall goes up, allowing West Berliners to visit their relatives in the other part of the city over Christmas. More than 700,000 West Berliners take advantage of this long-awaited chance to see their loved ones on the other side of the Wall. Some 1.2 million cross over to the East between 19 December and 5 January. GDR post office workers are responsible for processing the permit applications. Although they are state employees, they do not represent East German public authorities like police or customs officials. As a result, the Federal Republic views the border pass agreement as an administrative agreement which does not signify recognition of the GDR. The SED regime, on the other hand, does everything it can to give the agreement the character of an international treaty. A total of four border pass agreements are negotiated up until 1966.