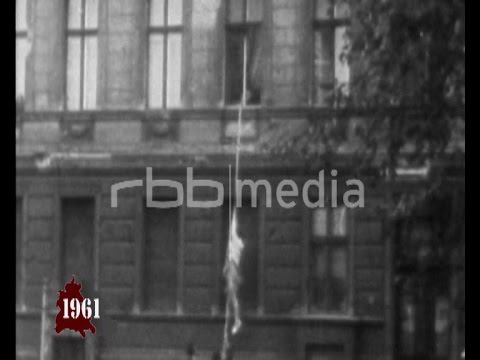 Bernauer Strasse is the scene of dramatic events in the days after the Wall goes up. The houses are in the East, the pavement in front of the buildings, in the West. People abseil down to the street from the windows of their flats. Others jump into the rescue nets of firemen waiting below. Residents are still throwing their belongings down onto the street as East German border police break into the buildings to try and stop them from escaping. In the autumn of 1961, the last tenants are forcibly evicted from houses on Bernauer Strasse. Nevertheless, in the years that follow, numerous escape tunnels are dug from the basements of houses on Bernauer Strasse. On 15 August 1961 non-commissioned officer Conrad Schumann is captured on film as he leaps across the rolls of barbed wire in the French sector throwing his weapon aside. This photograph will become an emblematic image of the city’s division the world over.

Detonation of Church of Reconciliation 1985