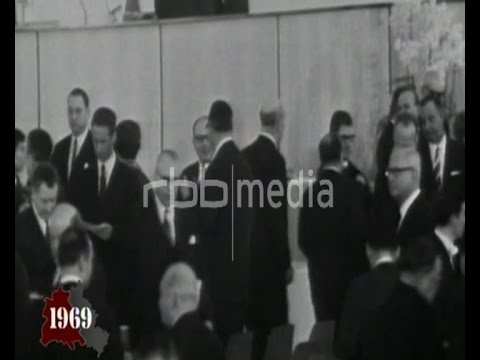 Election of President of the Federal Republic, Gustav Heinemann, March 05, 1969

On 5 March 1969, the West German Federal Assembly elects Gustav Heinemann to the post of Federal President in West Berlin. His election is taken as a sign of the political reorientation in Bonn: in autumn 1969 a social-liberal coalition comes to power in the Federal Republic, led by Federal Chancellor Willy Brandt. East Berlin accuses the West Germans of violating the city’s special status by holding the presidential election in West Berlin and seals off transit routes. GDR chief commentator Karl-Eduard von Schnitzler lashes out on East German television, remarking that there is a village in the West German state of Schleswig-Holstein called Berlin. He suggests the Federal Assembly go and elect its Federal President there.